How's everyone doing? I recently pulled off a 1500km journey in 72 hours. It was tiring as hell and painful at times but it was worth it, pushing yourself is what traveling on a budget is all about.

Nov 18th - I hadn't slept a wink the night before, mostly because I was goofing around on the internet. My train was due to leave Cairo at 8am, I knew this was going to be an interesting journey given that I didn't have any maps, no route charted out or even a basic plan as to where my final destination was going to be. I took the local metro (train) from 'Sakanat El Maadi' to 'Mubarak' - the central train station. When I reached the railway station my ticket from Cairo to Alexandria (which I bought a few days before) was printed in Arabic so I had to ask around to figure out what platform the train arrived at, the coach and seat number I was going to be sitting in. While the train station was pretty run down, the train itself was pretty decent with comfortable seats and ample sitting space (35LE one way, well spent).
When I reached Alexandria 2 hours later at 10am, I was swarmed by taxi drivers so I walked a few streets down and tried to figure out what I wanted to do from here on. I didn't know anyone in Alexandria, and a friend told me a few days earlier to go to Siwa instead because it was better. I was quite interested to check it out once I heard that Siwa was close to the border of Libya, this would be a good chance to get a good feel for any cultural potpourri that happened across the border. I figured I'd buy a bus/train or whatever ticket I could get to Siwa and travel overnight while checking out Alexandria during the day. I walked up to a couple locals (Ahmed Ali and Ahmed) and asked them where the bus station was to buy a ticket to Siwa. They didn't really speak much English and I don't speak any Arabic; however they were quite helpful and actually got into a taxi (10LE) and took me to Moharam Bay bus station. I didn't quite get what was going on because they were haggling with a bunch of taxi and bus drivers for a while. Ten minutes later they came up to me and asked me to get into a shared taxi and said it was taking me to Matsah Matruh! I thought about trying to explain to them that I wasn't ready to go yet...but was it worth it at that point? I decided to change plans and head to Matsah Matruh right then, there were 8 people in that taxi including the driver. Three of us sat up front and I was cramped in the middle...seat belts were thrown across the torso when we reached a checkpoint, I didn't quite understand why the driver didn't wear seatbelts but when I checked I realized that the belts were actually broken. Anyhow 5 hours and 16LE later we were at Matsah Matruh, now I didn't know how to get to Siwa from here since I didn't do any prior planning. Rasheem, a middle aged man in the shared cab spoke a bit of English and was kind enough to show me where to buy my next ticket. Most people seem to love Indians here which is quite nice...they all know about Amitabh Bachchan and sometimes Shah Rukh Khan (both being popular actors from Bollywood). Rasheem even offered to give me money in case I didn't have enough on me, this was very kind of him. He requested me to read about Islam if I got a chance, it takes a while to realize how important religion is people's lives here...I wish him well for he was very kind.
My next bus which was 4 hours long and cost 17LE reached Siwa at 9PM at night. Siwa is a village that is famous for its agriculture (dates mostly), handicrafts and tourism. It had a very vintage feel to it but I couldn't see much since it was dark outside. As soon as I stepped out of the bus, a bunch of donkey cart drivers approached me and asked me if I needed to find a hotel to stay - Donkey carts are a very popular form of transport here in Siwa. The cheapest place I could find at that point in time was 50LE which was a single room with two beds, big enough for two people. Mohammed (the driver) and Ali baba (his 15 year old donkey, yes... I asked) said they would come around at 10AM the next morning and show me around Siwa, we negotiated a price of 150LE for all the touristy stuff. I didn't really mind at that point so I took it and grabbed a quick hot meal which included rice, meat, veggies and salad (20LE) since I didn't get a chance to eat all day.

Nov 19th - Woke up quite late that morning, non stop travel had taken it's toll on me. I quickly walked out to the common bathrooms (cleanliness in the bathrooms was optional here) and took a quick shower. After a quick breakfast that consisted of a sausage omlette and some chocolate milk (11LE), we set off to visit Siwa. I won't describe this in detail since there is much to write, but mostly because you can google "Siwa, Egypt" and find reviews for sights to see online quite easily. The tour consisted of the following: Mountain of the dead, Oracle temple, Cleopatra hot springs, Sand dunes of the Sahara, Siwa's salt lake and finally the sunset at Fatnas Island. Between these, I ate lunch at a Bedouin restaurant (a desert dwelling arab ethnic group) which included rice, meat, veggies and salad (20LE). 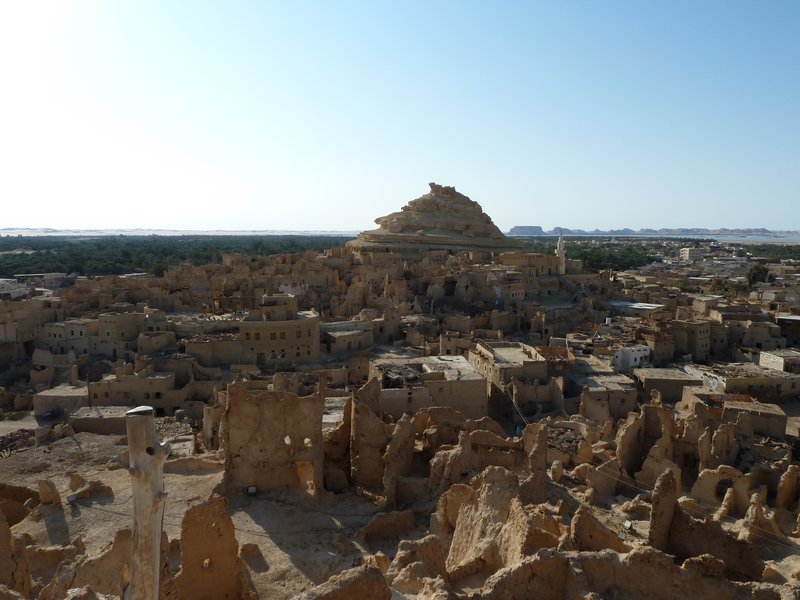 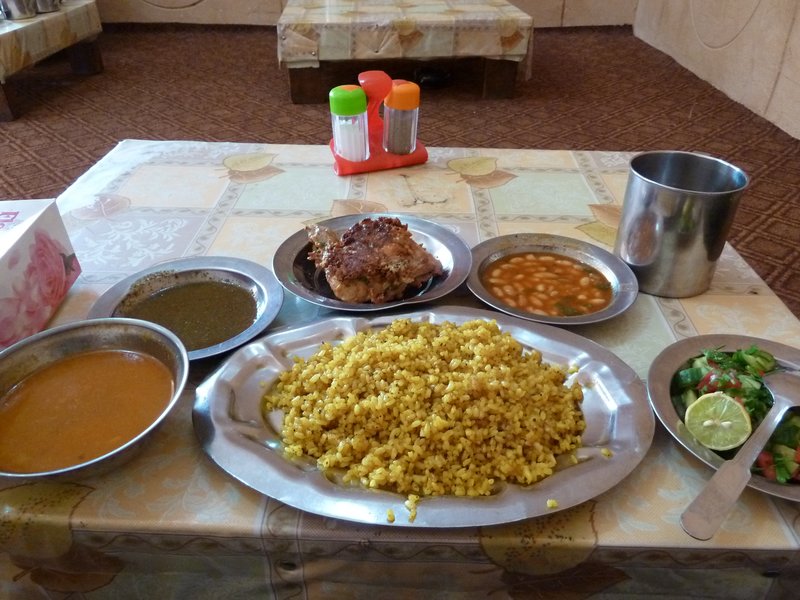 The best part of all the sight seeing was definitely the sunset at Fatnas Island, definitely a worthwhile experience. It's interesting how a beautiful scenery brings out deep conversations in people, three Americans who sat next to me were discussing their concept of God and love. I sat there and listened as I watched the sun set and disappear into the horizon. 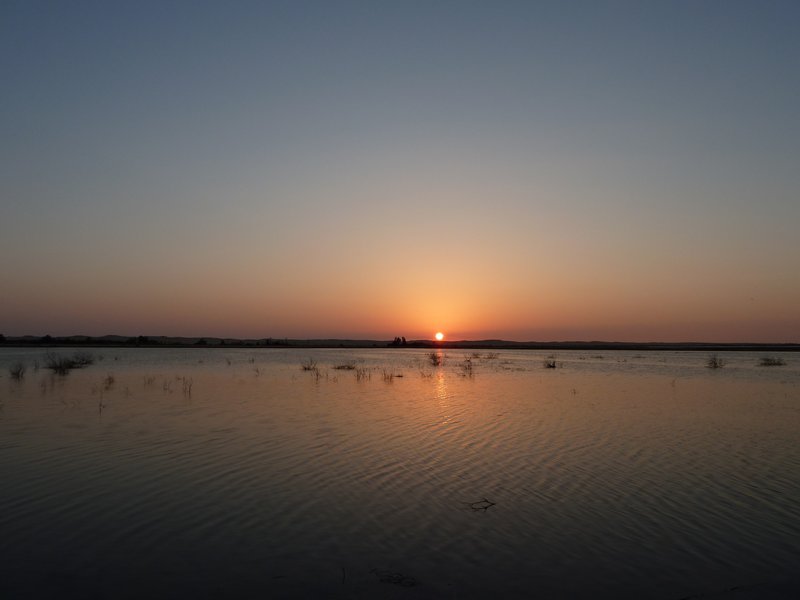 Anyway, at this point I'd had enough of Siwa and was ready to head back. I took the 8pm night bus out of Siwa (65LE) and headed to Cairo direct (I should've done this on the way there as well but I didn't really plan too well...). I reached Cairo at 5am and took a cab back to the apartment in Maadi (30LE). This was a long arduous trip that stretched over 1500km and cost just $70 - this could've been cheaper if I had planned better. Anyway, personally I thought Siwa was over rated except for the sunset but then again coming from India, I've already seen many villages there which I personally think are far more beautiful. Then again, Siwa is near a desert so it is endowed with it's own beauty in certain ways. I don't think I'll be going back though

As always, thanks again for reading.

This is Sandeep, signing out.

Previous Next Table of contents

Comments on this blog entry are now closed to non-Travellerspoint members. You can still leave a comment if you are a member of Travellerspoint.

If you aren't a member of Travellerspoint yet, you can join for free.