Those of us who are watching the news today are aware of the recent turn of events in the Middle East. With the fall of the Tunisian government (protests caused the ruling president to flee the country), on Jan 25, 2011, scores of Egyptians unprecedentedly took to the streets demanding an end to President Mubarak’s ~30 year rule. Soon after this, Yemenis followed in the same direction demanding an end to oppressive leadership. In my mind, the question that begs to be asked is – what is happening in the Middle East today? Why is there such a huge uprising in so many countries in this region? It is not surprising to see that the underlying theme is essentially the same; a bulging population of unemployed youth, rampant poverty, illiteracy at large and a government has simply failed to provide for its people. A system where Democracy is abused is clearly worrisome, when a ruler decides to use his power to constantly re-elect himself we end up with a situation of autocracy and authoritarianism. The longer these protests and upheavals continue; the domino effect that will ensue across the region will clearly be of extreme importance to the world at large.

Egypt is a prime example of the struggle faced by most citizens of the Arab world today - The people want freedom, jobs and a better shot at life, something that the current regime is unable to provide. A quick stab at statistics show that 50% of Egypt is under poverty and a large percentage (over 70%) of this number is under 24 years of age. These statistics become crucial when we notice the abnormally large number of unemployed youth in the country. Employing the younger generation not only leads to less violence on the streets, it also ensures a successful future for the country. There is so much growth potential lost when a country’s youth is disillusioned and needs to resort to violence to get their basic needs met.

In a way, I consider myself lucky to be amidst the revolution that is happening today, this is history in the making and I’m glad to be a part of it. While the rest of the world watches the turn of events on TV, I am humbled to be a witness and watch the proceedings in person. As I have mentioned before, this is an important turn of events not just for Egypt but also for the rest of the Middle East. The stability of this region depends on what transpires in Egypt, a country of 80 million people which is more than half the Arab world. Egypt also has a large say in the peace process in the region because of it’s proximity to Israel. A lot is riding for the international community on the outcome of this revolution because of several reasons – a regime change might spark a domino effect across the Middle East, on the other hand if the government manages to suppress the crowd we might see the rise of another autocracy that rules with an iron fist and further represses its people.

A large number of countries in this region are ruled by authoritarian leaders who are drunk with power and have no concern for the growth and development of their nations. If Egypt succeeds in overthrowing its government, it will spawn an infectious momentum inspiring a wave of coups to follow suit in the region. I have had the opportunity to speak with a lot of people in Cairo and the impression I get is that most people are fed up with the extreme disparity between the rich and the poor, the lack of opportunities and the high prices of basic necessities. Ahmed, a local resident of the suburb of Maadi where I live spoke to me about the grievances faced by his people today. Ahmed tells me that in Egyptian culture men are required to have a reasonably well paid job and own a furnished apartment before they can get married. All these expenses including the marriage ceremony add up very quickly and hence, most unemployed youth are finding it extremely difficult to get married and settle down. Speaking to Taib, a driver who works for my company, I was taken aback when he mentioned that he was 31 years of age and had not experienced life outside of Mubarak’s regime yet. One can see how the local people’s frustrations have been silently building given that their lives are affected on so many levels.

In most developing countries the wealth is controlled by a small percent of the population, this is detrimental to the socioeconomic stability of that country at large. On a very basic level, in order to ensure the successful growth of a country, its middle class must be provided for; this section of society is the engine of economic growth - their appetites for goods and services ensure the fostering of positive capitalistic forces thus boosting overall growth of the economy. Unfortunately the government in Egypt failed to help nurture the growth of their middle class which accounts for a large section of its 87 million people. The general sense I get from talking to people here is that Egypt is a tightly run state with little or no freedom of expression. Any displeasure or distaste expressed for the ruling party is quickly quelled by the forces that be. This is why the events that we are seeing today are unprecedented in their nature, spurred on by the events in Tunisia, a significant number of people have finally lost their fear of the government, they are tired of lack of opportunities and they want change! What good is a democratic process of election and governance if elections are rigged, freedom of speech is not implemented and corruption runs rampant? Personally, I find the government blocking channels of communication most frustrating. This is dangerous and can cause more riots, confusion and increase the loss of lives. Take the government imposed curfew for example; what good is a curfew that is announced on TV when most people are out on the streets without working cell phones or internet connections? Is someone expected to personally inform the angry mob that a curfew has been imposed on them – Who might have the courage to bell this cat? 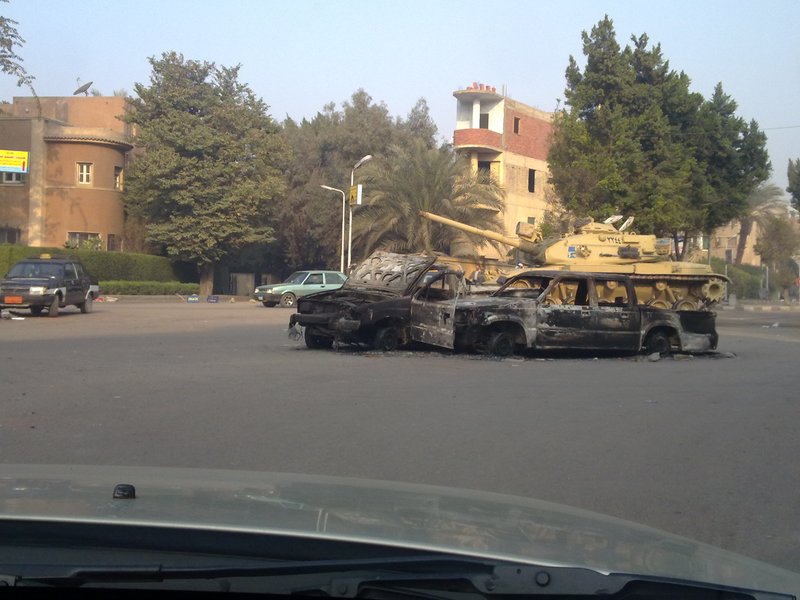 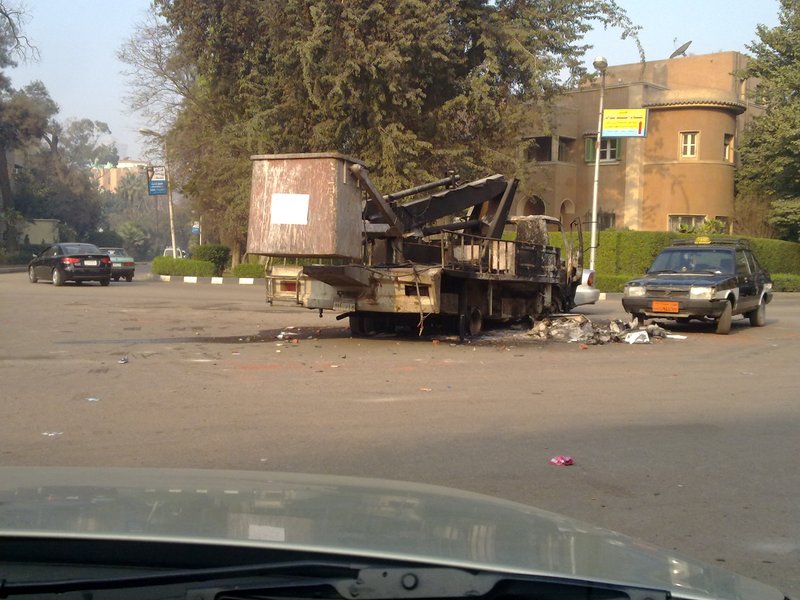 The whole idea of stemming and controlling basic human rights is ridiculous. The people are merely seeking a chance to have a say in making decisions that will improve and influence their lives. It must also be said that while the protests have have taken a violent turn in places with poorer populations, they have been largely civil in most other parts of the city. Men of different ages are taking to the streets to protect their neighborhoods in the event of riots or robberies. There are people armed with sticks and wooden clubs patrolling the streets outside my apartment complex, this is because the police have shut down and disappeared for the most part. The army is the only force trying to maintain peace at the moment. It must be said that the army is very popular here in Egypt and holds an almost mythical presence in the country. As chants of “The army and the public are one” resonate through the streets, the protesters are doing their best to not clash with the army and directing their anger and hatred towards the government instead. This is a symbol of an educated, civil mob – one with direction and an overall sense of purpose. Most Egyptians I’ve talked to say they feel a sense of national pride today that they haven’t felt in ages. They are proud to be Egyptians and have come together to cleanse their country of the political evils that have beset it over the past few decades. 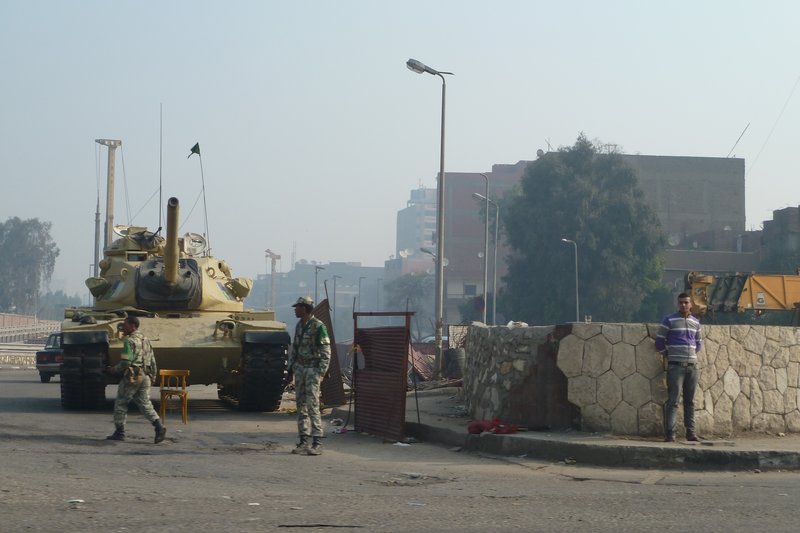 I’d like to conclude by saying that these demonstrations have brought together people from all orientations in Egypt – the younger generation, the middle class, the older generation, rich people and poor people; even women are taking part in what is completely unprecedented. Whatever happens today, I do hope the country moves forward in the direction of positive reform and that its people’s needs are attended to. It is evident that the ruling party of Egypt does not know how to handle a situation as delicate as this and has stooped to levels of trying to bully its own citizens into submission. Resorting to violence and cutting off communication will not solve the problem and the issues of poverty, unequal distribution of wealth and poor governance will continue remain at large. I hope that the International community chooses to be on the right side of history today because what transpires from this revolution will either make or break the peace and stability of the Middle East in the years to come.

Thank you for reading. This is Sandeep – signing out.

Olivia,
Unfortunately, the only way to respond or reply to comments on this site is by posting them. Your post has been removed. I will answer your questions as best as I can.
Cairo is a good city to visit, there is quite a lot it has to offer and you could easily spend up to 4 days here. If you're in a hurry, I'd suggest seeing the things you consider most important - Pyramids, Coptic Cairo etc. I also recommend Islamic Cairo, it is a nice place to visit. If you're travelling alone in Cairo, you can take a cab (white cabs are preferred over the black ones) OR you can travel by train. The trains are generally empty during the afternoons and they take you directly to the museum (downtown..stop name: SADAT).
Regarding Aswan, you can easily see whatever Aswan has to offer in a day or two. The ideal way to go about this is to take the train from Cairo to Aswan, take in the local sights (Nubian Museum, Felucca on the Nile etc) during the day, spend the night there and take the 3:00AM bus to Abu Simbel (which is simply breathtaking). The whole tour (Abu Simbel, Temple of Philae, high dam, unfinished obelisk) costs around 80LE plus entrance fees at various places. The tour should be finished around 3:30PM. If you want to, you can leave Aswan the same day and head over to Luxor.
You will need at least 2-3 days in Luxor ideally (that is if you are very keen on visiting all that Luxor has to offer at a relaxed pace. You should be able to do this in 2 days as well). Keep in mind however that Luxor can be a bit annoying for a single female traveller since most of the locals try to make money off tourists. Any good guide or a brief search on the internet will tell you of the sights Luxor has to offer.
The sleeper train is very safe in general, the only downside is the price ($60 one way). Apart form this you'll find that a lot of tourists take the sleeper train from Cairo - Aswan/Luxor. You should be fine here.

Comments on this blog entry are now closed to non-Travellerspoint members. You can still leave a comment if you are a member of Travellerspoint.

If you aren't a member of Travellerspoint yet, you can join for free.